The movement of a roof can be quite disconcerting if or when it takes place. It can be noticed as a sag or a bump in the roof cladding. It can be in timber or steel roofing. The question remains, what causes roof movement? Read on!

No bracing provided particularly in a trussed roof combined with excessive wind/loads, allows the roof to move. The wind load is nominated on the plans and ranges from low at N1 to N4 but it is common in new areas for the wind load to be N2 or N3. The wind load tells the designer how well the roof needs tying down and what is needed for the walls to resist wind impact.

Sometimes the trusses are delivered and are stacked on uneven ground and this can bend them out of shape. The code on trusses is quite specific about this and states the trusses need to be placed level or flat and erected soon after delivery. Nearly all houses now are designed with a trussed roof, thanks to computer software, it has made the process quite simple. However the truss manufacturer will send out a plan of where each truss fits and the roofer must follow this design unless something appears amiss. This is why the truss manufacturer takes span measurements from the job, so exact spans can be worked to. 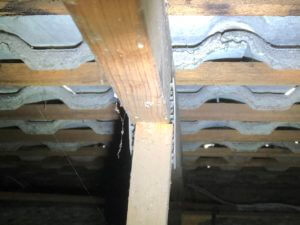 Trusses are designed generally to bear on outside walls only and require at least a 20mm clearance over internal walls. If this is not done the truss webs do not work the way they are supposed to. If the connection between trusses is not correct the roof will not resist the forces it is supposed to. The last point is important,  if loads are placed on or in the roof without engineering calculations then some form of failure may take place. This was the case in what became known as the, West Lakes Golf club disaster. The death of the two patrons brought about new legislation regarding truss roof erection.

At HomeMasters we take roofing problems very seriously and all inspectors have taken the course on trussed roofs. At one inspection we undertook the roof appeared to be sagging due to some form of truss failure. On close inspection we found that the toothed plates that connect the parts of the truss together had come loose or let go. We counted well over ten trusses that had the problem and on checking with a truss engineer found that we needed to reconnect the nail plates, and reinforced any moving or bent parts. The plates where screwed back in place each side which certainly strengthened the connections. The engineer then rechecked the work and passed the whole thing as being , “fit for purpose” .

Problems with Standard or Cut in Roofs!

Cut in or standard roofs are getting rare and have largely been replaced by trussed roofs. At Homemasters we have found that some carpenters have forgotten about surface connection or friction and do square cuts when the ends should be shaped to give a tight fit. The shaped fit is replaced by ten nails from a nail gun in the form of a cluster. This is not covered in the specification but is noted in the timber framing code and other literature, such as the Australian Roofing Manual. The Australian Standard for Residential Timber framed Construction AS 1684-2 is the, ‘go to’, book for all timber sizes. If wrong sizes in timber are chosen then the structure will be compromised. Most carpenters know what the standard sizes should be for various members but things have changed in recent years so further education is needed to bring the trades up to the latest types of construction.

HomeMasters were requested to check a building at Bedford Park in Adelaide. At some stage an addition had been added and the roof resembled a Japanese Pagoda, with a long sag in the ridge which the current owners could not explain. On entering the main roof we were able to reach the roof of the addition. The small gap between the two roofs had been blocked by a hot water service. By sliding over the top of the water service the additional roof was entered. The air conditioning people had removed all the collar ties in the roof to make room for the air conditioning ducts. The collar ties are a roof member that keeps the centre of the rafters at the right spacing. Once they are removed the rafters will sag and allow the ridge to sink. The prospective buyers refused to purchase on the grounds that it would take considerable work and money to rectify the problem.