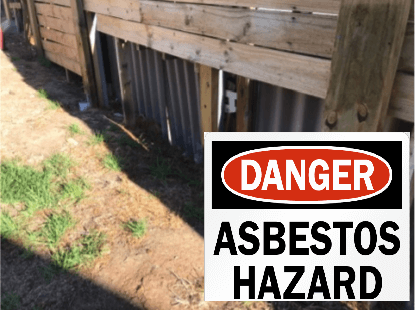 Potential purchasers of a home in Reynella, in Adelaide’s Southern Suburbs were thankful they had commissioned a Homemasters Building Inspection as it revealed a dangerous Asbestos risk.

It is widely known that repeated exposure to Asbestos can cause asbestosis, lung cancer, mesothelioma and breathing difficulties and it is especially worrying when Asbestos is found in a home or on a property.

A recent building inspection of a home in Reynella not only revealed that the fencing panels were made out of fibrous cement sheeting (asbestos), but they posed a significant risk as they were in a poor state of repair and leaning heavily to one side.

Asbestos poses a real health risk when it becomes damaged or disturbed as this is when it releases carcinogenic (cancer causing) microscopic fibres into the air that may be inhaled or ingested into the body.

If the fence panels at the Reynella home which were leaning heavily to one side were to fall, get damaged, chipped, break or be drilled as part of a repair, then they would release microscopic asbestos fibres into the air creating a potential health hazard to anyone in the vicinity.

Upon identifying the makeup of the fibro fence panels and recognising the potential risk of the fence collapsing, Home masters immediately informed the client and existing homeowner of the impending risk.

In all instances where asbestos is found in a building or on a property, Home masters refer clients onto a licensed asbestos contractor who can assess the risk and or remove any contaminated materials. 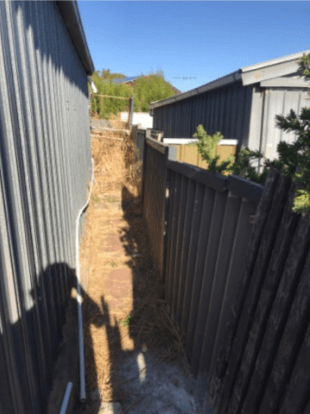 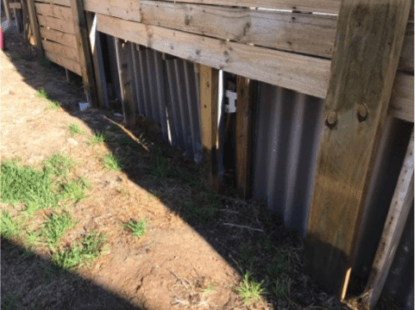 Could my home be at risk from Asbestos?

If your home was built from 1990 onwards it is extremely unlikely that it contains any asbestos. In the 1980’s asbestos use in domestic building materials in Australia was completely phased out, and by the end of 2003 all products containing asbestos were banned throughout Australia.

If your home was built or renovated before 1990 it may be comprised of some building products that contain asbestos. If your home does have building products that contain Asbestos, it only presents a health hazard if the Asbestos fibres are released into the air. In fact, the potential for asbestos exposure on an older house is often greatest during a renovation as demolition of walls and ceilings can cause any materials containing Asbestos to release their fibres into the air. Asbestos fibres can be released into the air in any number of ways including through impact, abrasion, drilling, sawing, cutting, damage etc.

A NSW government factsheet on Asbestos states- ‘Finding that your home or workplace is made from fibro products does not mean your health is at risk. Studies have shown that these products, if

in sound condition and left undisturbed, are not a significant health risk. If the asbestos fibres remain firmly bound in cement, generally you do not need to remove the fibro’.

What are the risks of exposure to asbestos

Whilst the lining of the nose and throat filter out many airborne contaminants before they are absorbed into the body, once asbestos fibres are in the lungs the body can’t break them down to expel them. Over time these fibres sit in the lungs and can cause inflammation, scarring and can lead to more serious asbestos related diseases.

There is no safe level of exposure to airborne asbestos, however your risk of developing a serious disease related to asbestos exposure depends on many things including the amount, intensity and duration of the exposure, your age and if you smoke. However, the majority of people who get ill from asbestos are usually those who have had prolonged exposure to it or regularly worked with the material.

If you are worried or would like more information on asbestos and its health risks, there are some great resources available online including http://www.asbestoswise.com.au/

The experienced team at Homemasters offer rigorous and thorough building and pest inspection services throughout Adelaide and the southern suburbs. We’ll be there to inspect a home within 24 hours of your call and talk you through our comprehensive report so you can be confident in your purchase knowing exactly what you are buying into.